Scale models in classrooms and museums can show the sizes of the planets relative to the Sun and each other, but they cannot show the vast distances between them. For that, we need a model even larger than a city. 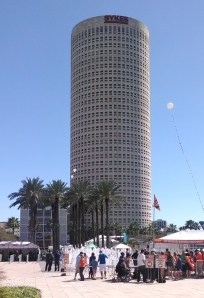 At a scale of 1 to 28.7 million, this would be the largest scale model of the solar system in the United States, and one of the largest in the world.

This website provides maps showing the orbits of the planets, so that suitable locations can be found, and scale dimensions so that models can be designed. There is also a downloadable KML file for Google Earth, kindly provided by Daniel Aung using the website Keith’s Think Zone. Everyone is invited to participate, including artists, astronomers, teachers, students, parents and kids. There can be more than one model for each planet, as long as it is located somewhere on that planet’s orbit. You don’t need permission to add a planet model, except from whoever is in charge of the property where it will be placed. If you let us know what you’re up to, we’ll include information about your planet model on this website.

Some planets will be easy to add. For instance, take a look at this map of Earth’s orbit. If you live or work within the two blue lines and you have a globe there, then you are already participating! In fact, a 16-inch globe is very close to the right scale.

Mercury and Mars have more eccentric orbits, allowing for more possible locations. There are several Tampa schools that could host models of those planets in their science classrooms. A planet like Jupiter will be a bigger project for an artist or a group to take on, perhaps requiring permits or grants. Each planet will have challenges and rewards of its own.

With a community effort, we can build the largest scale model of the solar system in the United States!

Detailed information and zoomable maps are provided for each of the bodies in the solar system below, but first here are a couple of static maps that show the big picture of the project.

The first map shows the inner, terrestrial planets: The colored circles show the average orbits of each planet: black for Mercury, yellow for Venus, blue for Earth and red for Mars. Because of the eccentricity of some orbits, the lines representing the actual orbit areas will be wider, as seen in the individual planet maps in the sections below. 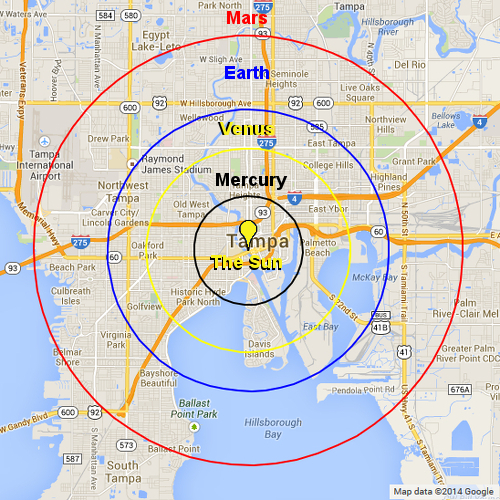 The next map shows the outer planets, the gas giants: red for Jupiter, yellow for Saturn, green for Uranus and blue for Neptune. 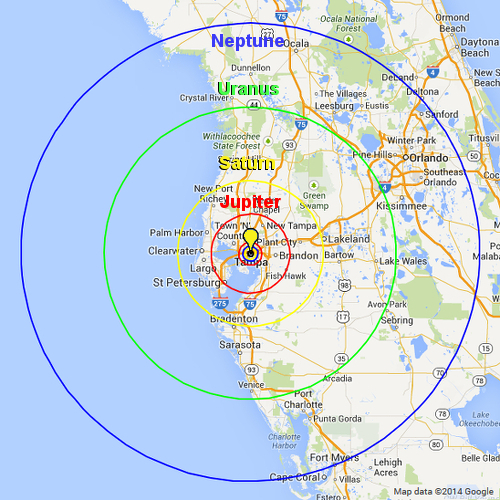 Now let’s focus on the individual bodies in the solar system. 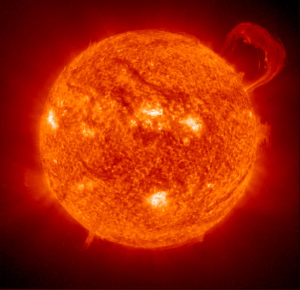 Rivergate Tower in downtown Tampa represents our Sun. The tower is an architectural gem that also has a scientific element. Its measurements are based on the Fibonacci sequence, in which each number is the sum of the previous two numbers. The lobby floor is made up of concentric limestone circles that represent, among other things, the days of the year and the phases of the moon. The building itself represents a lighthouse, and at sunset, the limestone facing glows yellow-orange. Most important for our purposes, Rivergate Tower is a large round structure in the center of Tampa, a landmark whose size and location we can picture in our minds when visiting the other planets. 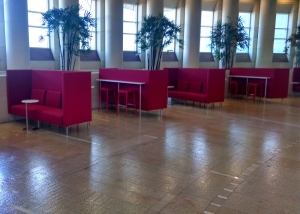 Rivergate Tower is approximately 48.5 meters (53 yards) in diameter, and its approximate center coordinates are latitude 27.947267, longitude -82.460581. Its size and location determine the size and location of all the planets in our model solar system. The Sun is 1,392,000 kilometers in diameter, so dividing by the tower’s diameter yields a scale of 1 to 28.7 million. To arrive at all of the other distances and sizes of our model, we divide the actual measurements by 28.7 million.

The Speed of Light

Sunlight, like all light, travels very quickly, at 300,000 km per second, or 186,000 miles per second. On Earth, light may seem to travel instantaneously, but it takes much more time to travel the vast distances of the solar system. For instance, light from the sun takes about eight minutes and 17 seconds to reach Earth. The neat thing about our model solar system is that the speed of light gets scaled down as well, to 37.6 kph or 23.3 mph. So if you start out from Rivergate Tower and travel at normal city speeds, accounting for red lights, you will be traveling at our scale speed of light! If you can drive (or ride a bike!) from Rivergate Tower to Inkwood Books in under four minutes, then you will arrive there at the same time that light from the Sun reaches Mercury. 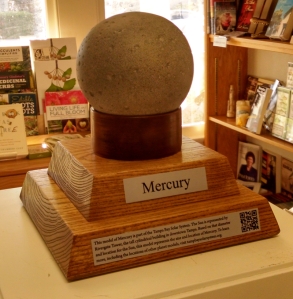 A model of Mercury has been created and was previously placed at Inkwood Books, but the store has now closed, so Mercury needs a home! If you have a business or other public place within Mercury’s orbit where you would like to display the model, please contact us at info@tampabaysolarsystem.org.

Mercury is the closest planet to the Sun, and our model of Mercury would be located relatively close to Rivergate Tower, at approximately 1.5 miles away. Mercury is a grey, rocky planet with many craters, as our model represents. The model is approximately 6.7 inches in diameter, as scaled from the size of the planet itself, which is 4,880 km (3,032 mi) in diameter. 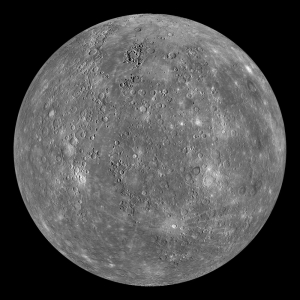 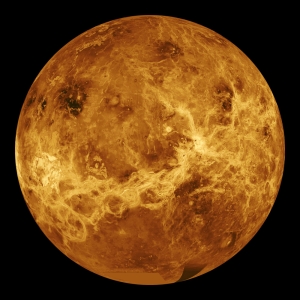 Venus is both the closest planet to Earth and the closest planet in size to Earth. It is also the hottest planet by far, with an average temperature of 863 degrees Fahrenheit. It appears yellow in color due to an opaque layer of clouds of sulfuric acid. Venus is 12,103.6 km (7,521 mi) in diameter, so a model should be 42.2 cm (16.6 inches) wide. 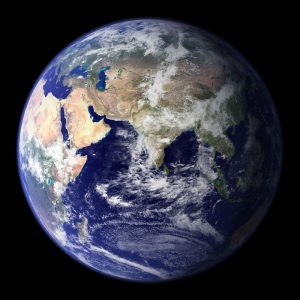 The third planet from the Sun is our home, Earth. No one will blame you if it is your favorite planet. 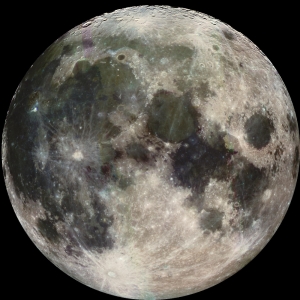 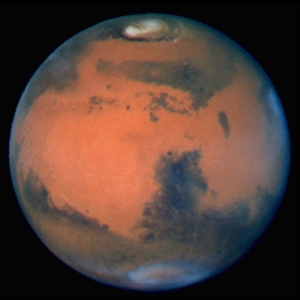 Ceres and the Asteroid Belt 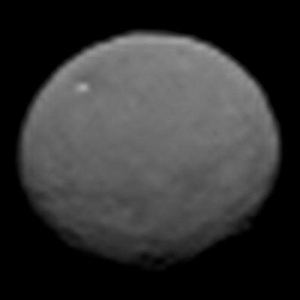 The main asteroid belt is located between Mars and Jupiter and contains hundreds of thousands of irregularly shaped bodies. About half of the asteroid belt’s mass is accounted for by four large asteroids: Ceres, Vesta, Pallas and Hygiea. Of the four, only Ceres is large enough, at 950 km in diameter, to be classified as a dwarf planet. Ceres appears to have a rocky core and an icy mantle. High-resolution images of Ceres were obtained in January 2015 by the Dawn spacecraft. Because of its larger size, Ceres is the best choice for a model to represent the asteroid belt in our model solar system. A model of Ceres should be 3.3 cm and should be located between 13.33 km and 15.52 km from the center of Rivergate Tower, or between the gray lines on the map below. 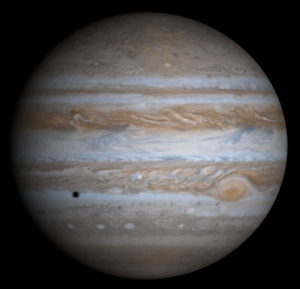 Jupiter’s orbit takes it to between 740,573,600 km and 816,520,800 km from the Sun, so our model should be located between 25.8 km and 28.45 km from the center of Rivergate Tower, or between the orange lines on this map. There are a few locations in downtown St. Petersburg that would be perfect for a public art project of this size. 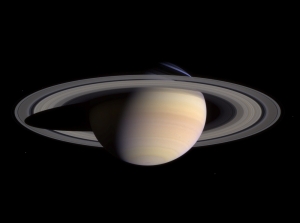 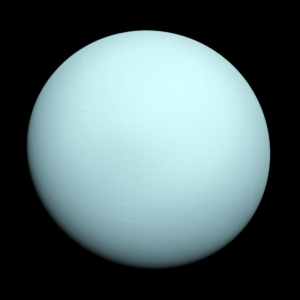 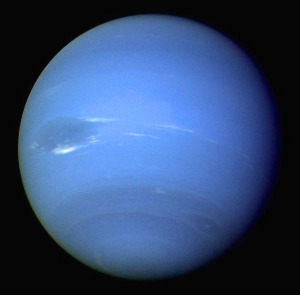 Neptune has a deep blue appearance due to in part to trace amounts of methane in its outer atmosphere. Neptune’s diameter is 49,532 km, making our model 1.73 m (5.68 feet) wide.

Dwarf Planets and Other Trans-Neptunian Objects

Beyond Neptune, there are hundreds of minor planets, with Pluto and Eris being the most well-known.

Eris was discovered in 2005 and was briefly described as the tenth planet in the solar system, but instead its discovery provoked astronomers to formally define what a planet is, which resulted in Pluto being demoted to a dwarf planet, and Eris also being classified as a dwarf planet. Eris is approximately 2,326 km in diameter, and its extremely eccentric orbit takes it from 5,723,000,000 km to 14,602,000,000 km from the Sun. So a model of Eris in the Tampa Bay Solar System would be 8.1 cm (3.2 in) in diameter, and could be located anywhere from 200 km (124.3 mi) and 510.4 km (317.4 mi) from Rivergate Tower in downtown Tampa, or between the two grey circles on the map below.

The Tampa Bay Solar System needs you! Read more about how you can participate, and don’t forget to share this website through social media to help spread the word.

Please give us your feedback about the project or let us know how you'd like to help out. Email info@tampabaysolarsystem.org or use the contact form.

Donations are appreciated and are used to pay for materials. All labor is volunteer.